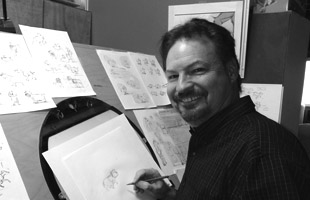 Russ is a professional animator turned storyteller. He is presently working as a story artist but is well recognized for his work as a supervising character animator on many of the Disney classic films. His career spans almost three decades and has animated on thirteen feature films such as The Little Mermaid, Beauty and the Beast, The Lion King, and Tarzan. Russ was nominated for an Annie Award for animation of the character Phoebus in the feature The Hunch Back of Notre Dame. He also owned and operated his own animation studio, Edmonds Studio, where he directed commercials and collaborated with other studios on various smaller projects. He has instructed animation at some of the leading film schools such as CalArts and UCLA, passing on his own knowledge and the knowledge from Disney’s Nine Old Men. One of Russ’ passions is animals. He owned a horse and cattle ranch where he studied locomotion and behavior in wild and domestic animals.
Russ is focusing his energy toward pre-production work in story. He is storyboarding for studios as well as writing, designing, and boarding for shorts and feature length animated projects.
Russ is also writing a book on animal animation, locomotion, and behavior. This book is intended to help the production and pre-production artists create believable animal characters filled with personality. In his spare time, Russ and his wife Angela are writing and illustrating a series of children’s picture books.