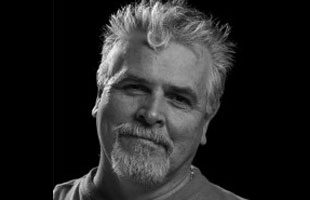 Robin Alan Linn was born in Southern California in a house where the television was always on. Robin was not so much raised on television; but rather he was raised by the television. His earliest memories are of Saturday mornings spent, cereal bowl in hand, watching hour upon hour (upon hour) of Warner Brother’s and Hanna-Barbera cartoons. With all of his father’s attempts to engage his mind and body in anything remotely sports related failing and Robin’s attempts at wood and metal shop resulting in a series of small but painful head and finger wounds he found himself in art class and, by his own admission, never left.
Foregoing a formal college education for a lucrative career as a convenience store night clerk, bank teller, bar bouncer, life drawing model, floral delivery man and costumed cartoon character Robin started sculpting as a way to stay sane. Through a series of events that decry any career path logic Robin found himself employed at Hanna-Barbera Cartoons as a sculptor. For years he spent his days there sculpting kiddy meal toys and animator’s maquettes and in short time rose up to become an Art Director with their licensing and marketing division, Orbit City Art Company. With the digital world dawning, Robin left H&B and went to work for Sony Pictures Imageworks arriving there as a digital character modeler before “going over to the dark side” of artist management. He eventually achieved the rank of Director of Animation Production and college outreach chair for the Imageworks Professional Academic Excellence (IPAX) program. As chair, Robin found himself being invited to speak on various college campuses and conferences around the globe about his experiences and his passion for the animation industry.